Carbon Capture and Storage – How does it Work and What is Its Role in Emissions Reduction?

One of the largest areas of focus for the global energy industry is reducing greenhouse gas emissions to achieve targets set out by the Paris Agreement and mitigate the risks posed by climate change.

Carbon dioxide (CO2) is emitted as a by-product during the burning and conversion of fossil fuels like coal, oil and gas to energy.

Large-scale emissions reductions are being achieved through several measures including improving efficiency of power plants, existing infrastructure, and replacing coal with natural gas.

Renewable energy sources will also play a key role in emissions reductions as they become an increasing part of the future energy mix. For example, here’s what the Australian Government outlined in a recent Discussion Paper when discussing the future role of natural gas in relation to renewable energy:

“Gas is already playing an increasingly important role in South Australia to balance intermittent renewable electricity, with the share of gas generation increasing significantly even as the emissions intensity of the South Australian grid continues to decline to very low levels.”

CCS could reduce greenhouse gas emissions, while allowing fossil fuels to be used to generate reliable and affordable power. According to CCS think tank, the Global CCS Institute, CCS technologies are the only ones capable of reducing large-scale emissions from myriad industrial sources.

So, what is CCS exactly?

CCS is a three-stage process where CO2 emissions are captured, compressed and then safely and permanently injected and stored in a site – normally underground – where it’s unable to enter the atmosphere. The process is known as carbon sequestration.

CCS research body IEA Greenhouse Gas R&D Programme (IEAGHG), which is a member of the IEA’s Technology Capability Programme, says carbon capturing has been used as a means of separating CO2 from gas since the 1920s. Using that technology to capture carbon and prevent its release into the atmosphere was first suggested in the late 1970s when it was being used in enhanced oil recovery (EOR) processes.

The global oil and gas industry has led the world in the practical deployment of CCUS technology for 25 years.  There are 21 large-scale facilities currently in operation around the globe with a further two under construction and 28 in development stage, according to the Global CCS Institute’s June 2020 tally. IEA data shows the current CO2 capture to be more than 35 million tonnes per annum.

Examples include Norway’s Equinor, which is operating large CCUS projects alongside its Sleipner and Snøhvit gas processing operations. In Canada, Shell has developed the Quest CCS project.

In Australia, the oil and gas industry is a global leader in research and deployment of greenhouse gas storage technologies. Australia’s stable geology provides a beneficial environment for the technology, with several geological storage sites already operating in Victoria, Western Australia and South Australia. 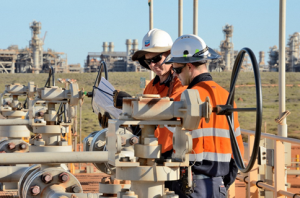 Energy from fossil fuels is released in the combustion (burning) and conversion process, which also results in the emission of CO2 as a by-product.

Three steps are taken to prevent the CO2 entering the atmosphere – capture, transport and storage.

Capture: this involves the separation of the CO2 from other gases produced at large industrial processing facilities. There are three methods of capturing CO2: 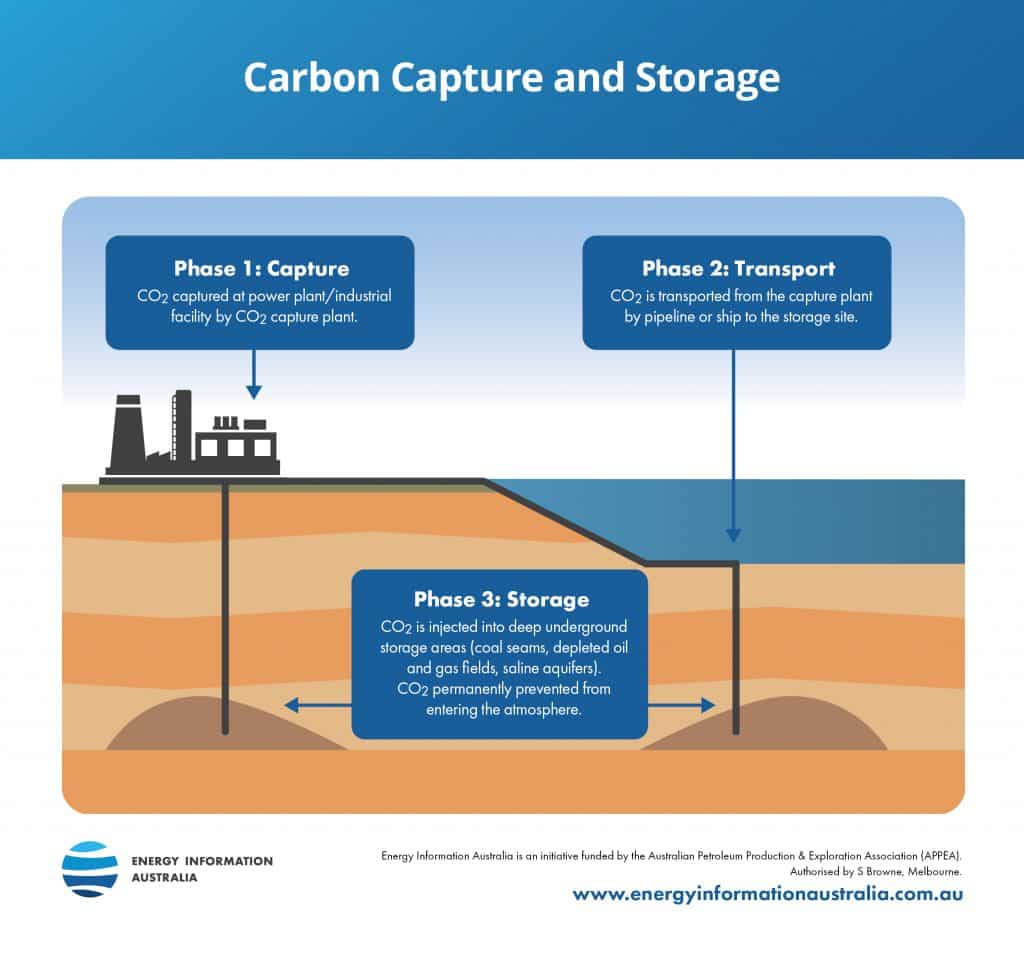 Transport: Once separated, the CO2 is compressed and transported via pipelines, trucks, ships or other methods to a suitable site for geological storage. Pipelines are the most commonly-used method of transport for large quantities of CO2.

Utilisation: In this stage, CO2 is recycled for use in the production of fuels, chemicals, fertilisers and building materials. Carbon utilisation is a developing market for waste CO2. 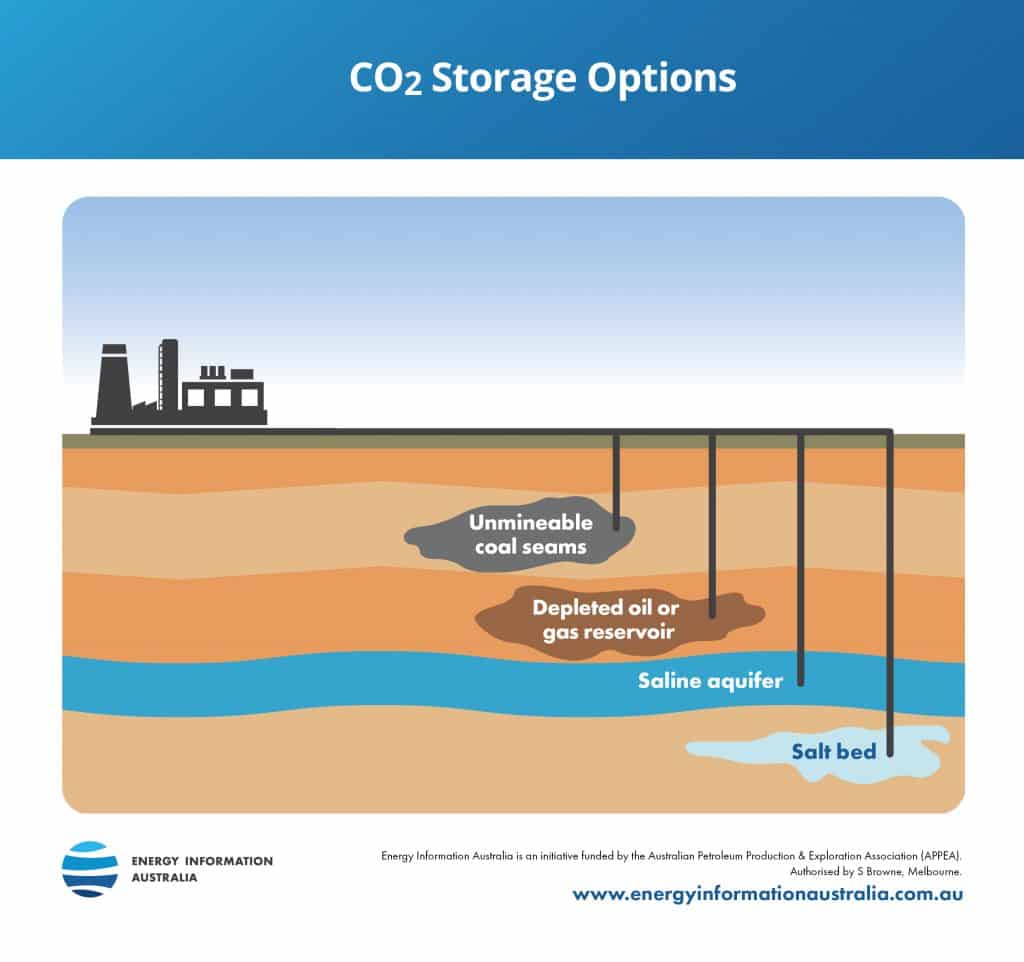 What’s ahead for CCS?

The IEA says it sees technology innovations and policy developments providing encouraging signs for the future of CCS in power generation. However, some challenges remain.

According to the, IEAGHG, whose charter is to evaluate technologies aimed at reducing greenhouse gas emissions, one of the biggest objectives in the CCS industry is to reduce the costs involved. Costs are the biggest hindrance to large-scale application of CCS right now and reducing the cost of new technology is an important step to bringing it to a commercial scale.

For CO2 storage, the IEAGHG adds, “the priority is to establish its credibility and acceptability as a safe, reliable, long-term store,” adding, “The fact that CO2 has been naturally stored for geological time-scales enhances the credibility of many of the storage options.”

In Australia, the CSIRO is actively studying ways to reduce the cost and improve the efficiency of CCS “so it is a viable option for Australia’s energy future.” Its key focus areas are in post-combustion capture and new monitoring systems for stored CO2 to ensure technical and environmental safety.

CCS – a part of our reduced emissions future

“When we consider the scale of the energy and climate challenge, the critical importance of carbon capture is inescapable.”

CCS is likely to play an important role in the transition to a cleaner energy future and as efforts continue to lower emissions globally.

With fossil fuels being part of global energy supply for some years to come, CCS remains a viable technological option to decarbonise the use of fossil fuels and prevent them entering the atmosphere.

View Report
Back to all Research